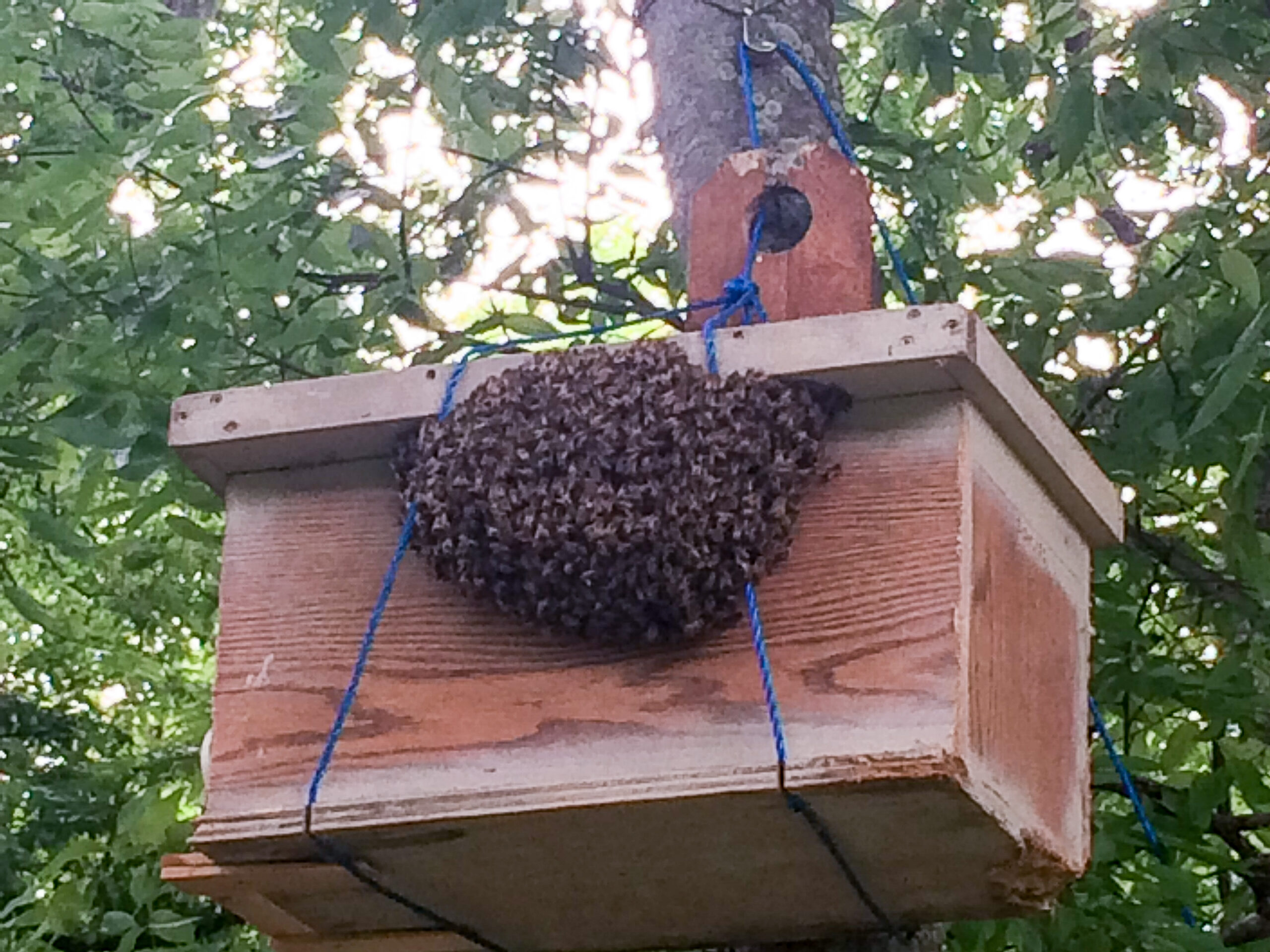 On the afternoon of Tuesday, May 10, while working my bees on the Harty Farm, a very large swarm decided to gather up around a swarm trap I had secured to a tree less than 24 hours the day before — around 2 p.m.

Apparently, the swarm of bees made a split decision, half of the bees decided to enter the swarm trap, but unfortunately, a large number of bees were undecided about the trap and its location and gathered up on the outside of the trap and on the attached tree. This action by the bees usually indicates that it will probably swarm to another location.

However, by 4 p.m., the outsiders were being forced to decide inside or outside.

Predictably, not all of the bees were convinced and by 6 p.m. a few thousand bees remained in the outside cluster, and they were still not willing to give up their position despite their dwindling numbers. Even at 7:30 p.m. with cooler temperatures and diminishing light, the outsiders were hunkering down for the night as the standoff continued.

The outsiders, preparing for the night, moved between the swarm trap and the tree to conserve heat. This swarm was showing signs of following more than one queen, one inside the trap and one outside on the trap’s side wall. Based on the size of the incoming swarm, it’s possible that it contained two swarms from different hives converging on one swarm trap.

About 1 p.m. on Wednesday and neither swarm was budging. The outsiders were still holding onto their claim as were the occupants of the trap’s interior. Somewhere about 2 p.m.the outsiders gave up their hold on the swarm box and moved on to another swarm trap about 150 feet away.

Thanks, to Honeybee communication the conflict was resolved and the end result will now be two new hives.

Or So I Thought!!  There’s a backstory and a new development to this event.

While going through my survivor colonies on the 10th, making a few two-frame nucs, it seems that scout bees from the inside swarm were investigating the activities. The plan was to reduce a ten-frame hive with supers down to a five-frame nuc with a queen cell and resources. The supers were to be combined with two other hives in need of both bees and honey, unfortunately, the heat of the day was cause enough to close up the hive with some extra comb, open frames to fill-out the box and the two supers, until the next day.

However, the next day became the 12th and instead of following my original plan I was greeted with boxes full of bees bringing in pollen and building comb. The activity that has occurred is called a usurpation swarm, which is a rare occurrence but surprisingly this is not the first time on the Harty Farm. The first time was a few years ago had two hives try to usurp the ownership of another hive and all three queens were balled up.

Next question is who are the few remaining bees at the swarm trap, bees that didn’t get the info about the move or new scouts out from another colony. I’m sure that they will let me know when they’re ready.

P.S. Yes, as of the 14th, there is another swarm in the box, small, maybe part of the original.

See video of Rick’s swarm on our Instagram page: https://www.instagram.com/tv/Cd-4a9WALNx/

You can find out more about which cookies we are using or switch them off in settings.

This website uses cookies so that we can provide you with the best user experience possible. Cookie information is stored in your browser and performs functions such as recognising you when you return to our website and helping our team to understand which sections of the website you find most interesting and useful.

Strictly Necessary Cookie should be enabled at all times so that we can save your preferences for cookie settings.

and your login information.

If you disable this cookie, we will not be able to save your preferences. This means that every time you visit this website you will need to enable or disable cookies again.  Also, members who login will not stay logged in between visits.